OnePlus Technology (Shenzhen) Co., Ltd. (一加科技) is a Chinese consumer electronics manufacturer headquartered in Shenzhen, Guangdong province, in the Tairan Building (泰然大厦) at the Chegong Temple (车公庙) subdistrict of Futian District.[6] It was founded by Pete Lau and Carl Pei in December 2013, and is currently majority-owned by Oppo as its only shareholder, which is a subsidiary of BBK Electronics along with Vivo, Realme and iQOO. The company is best known for making smartphones, and officially serves 34 countries and regions around the world as of July 2018.[2] 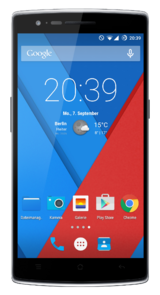 OnePlus was founded on 16 December 2013 by former Oppo vice-president Pete Lau and Carl Pei.[7] According to Chinese public records, OnePlus' only institutional shareholder is Oppo Electronics.[4] Lau denied that OnePlus was a wholly owned subsidiary of Oppo and stated that Oppo Electronics and not Oppo Mobile (the phone manufacturer) is a major investor of OnePlus and that they are "in talks with other investors",[8] although OnePlus has confirmed it uses Oppo's manufacturing line and shares part of the supply chain resources with Oppo.[9] The company's main goal was to design a smartphone that would balance high-end quality with a lower price than other phones in its class, believing that users would "Never Settle" for the lower-quality devices produced by other companies. Lau explained that "we will never be different just for the sake of being different. Everything done has to improve the actual user experience in day-to-day use."[10][11] He also showed aspirations of being the "Muji of the tech industry", emphasizing its focus on high-quality products with simplistic, user-friendly designs.[10] Continuing Lau's association with the platform from the Oppo N1,[11] OnePlus entered into an exclusive licensing agreement with Cyanogen Inc. to base its products' Android distribution upon a variant of the popular custom ROM CyanogenMod and use its trademarks outside of China.[12][13]

The company unveiled its first device, the OnePlus One, on 23 April 2014 which was intended to capture market from the Google Nexus series.[10] In December 2014, alongside the release of the OnePlus One in India exclusively through Amazon, OnePlus also announced plans to establish a presence in the country, with plans to open 25 official walk-in service centers across India.[14]

On 9 March 2014, the company expanded its operations to the European Union.[16]

On 16 December 2014, The Supreme Court of India and Delhi High Court banned the import and sale of OnePlus One phones following a lawsuit by Micromax alleging it has exclusivity for shipping phones with Cyanogen OS software in India.[17] On 21 December 2014, the ban was lifted. The device continues to be shipped with Cyanogen OS; however, a customized version of Android specially designed by OnePlus and named OxygenOS has been released, allowing later OnePlus devices to be sold in India.[18][19]

OnePlus made its products available in Southeast Asia for the first time, partnering with Lazada Indonesia[20] on 23 January 2015 and was expected to expand during that year throughout the region. In June 2016, OnePlus decided to pull out of the Indonesian market due to local regulations for imported 4G smartphones restricting sales of the OnePlus 2.[21]

At the launch event of the OnePlus 6 on 17 May 2018, OnePlus announced it would be opening five new OnePlus Experience stores in India, as well as 10 new service centers.[22]

According to market research firm Counterpoint Research, OnePlus topped the Indian premium smartphone market last year with a 33 percent share, beating Samsung Electronics with 26 percent. In the IDC survey, OnePlus ranked third in India's market with more than $500 in the first quarter of this year after Apple and Samsung Electronics. And it ranked second after China's Vivo in the 300-500-dollar market.[23]

In 2021 Oppo and OnePlus combined their hardware research teams via OPlus.[26]

In July 2021 OnePlus merged OxygenOS With Oppo's ColorOS, Both companies’ software remained separate, continuing to serve their individual regions (OxygenOS for OnePlus phones globally, ColorOS on OnePlus and Oppo devices in China) but share a common codebase, which OnePlus says should standardize its software experience and streamline the development process for future OxygenOS updates.[27][28]

Early phones were only available through a system whereby customers had to sign up for an invitation, which OnePlus called an invite, to purchase the phone at irregular intervals. The system was claimed to be necessary for the young company to manage huge demand.[29] OnePlus ended the invitation system with the launch of OnePlus 3 on 14 June 2016.[30] Announced via an interactive VR launch event, the OnePlus 3 initially went on sale within the VR app itself. OnePlus touted the event as the world's first VR shopping experience.[31] The phone was made available for sale later that day in China, North America and the European Union on the OnePlus website, and in India on Amazon India.[16]

On 23 April 2014, OnePlus began its "Smash the Past" campaign.[32] The promotion asked selected participants to destroy their phones on video to purchase the OnePlus One for $1 (US). Due to confusion, several videos were published by unselected users misinterpreting the promotion and destroying their phones before the promotion start date.[33][34] OnePlus later revised the rules of its promotion by allowing consumers to donate their old phones.[35] There were 140,000 entrants in the contest with 100 winners.[35]

OnePlus Playback is a series of music videos in collaboration with popular Indian singers, beginning in 2018.[36][37]

On 8 March 2021, OnePlus announced a $150 million deal with Hasselblad to develop camera technology for OnePlus, which also included the new OnePlus 9 series phones that had improved color processing and computational photography developed in partnership with Hasselblad.[39][40]

On 13 August 2014, OnePlus hosted a contest to give invites, which were hard to come by at the time, to their female forum members. Users were asked to post a photo of themselves with the OnePlus logo, images would be shared in the forum and could be "liked" by other forum members. This received major backlash for objectifying and degrading women, resulting in the contest being pulled within hours.[41]

The customer support at OnePlus was once the subject of strong criticism. In 2017, the company increased the number of customer service staff and set up customer service and repair centers in Asia, Europe, and the United States, greatly improving turnaround times for repairs and other issues.[42]

After several weeks of customer complaints on OnePlus forums and on Reddit, Google engineer Benson Leung showed that the USB-C cable and USB-C-to-Micro-USB adapter offered by OnePlus at that time did not conform to the USB specification. OnePlus co-founder Carl Pei on 26 November 2015 admitted that the cable and adapter did not conform to the USB specification, and offered refunds (although not for cables bundled with the OnePlus 2 phone).[43][44][45]

In July 2021, the company was accused of, and then admitted to throttling app performance. The throttling was uncovered by Andrei Frumusanu at AnandTech when he discovered the OnePlus 9 significantly diminishing the performance of Chrome in an effort to "improve battery life".[46][47]